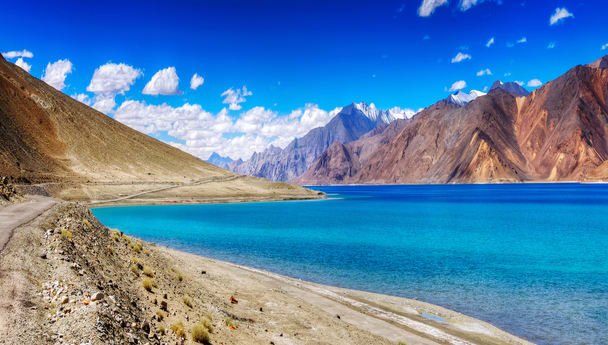 Ladakh, the Land of High Passes, wins hearts with its simplicity and rugged natural beauty. Spectacular landscapes, enfolded by serrated mountains, give the region its unique character. Largely influenced by Buddhism, Ladakh is home to numerous ornate monasteries. The pristine natural heritage of this fabled realm can be seen in its picturesque lakes, unspoilt by human civilization. Showcasing an exotic character and cloaked in a transcendental aura, Ladakh is a destination, which is gaining immense popularity among globetrotters. Ladakh tour packages are opportunities that would take you to see a world, so serene and picture-perfect, that it would seem like a dreamland. Reaching Ladakh can be a little tricky due to the undulating quality of its terrain; however, it is accessible by various means of transport. The main airport in the region is in Leh, its largest city. There are roads to access Ladakh for those, who would like to enjoy a drive. People can use National Highway 1D to come here from Srinagar or drive on the more popular Leh-Manali Highway. Ladakh has been bestowed with an abundance of natural wonders. Located in the north-eastern part of Ladakh, the Nubra Valley matches the ideals of scenic beauty.

While availing Ladakh holiday packages, keep in mind they take you to some of the top tourist attractions like Hemis Monastery, Thiskey Monastery, Tso Moriri lake and Pangong Tso lake. If you are an adventure seeker, a trekking trip to the Zanskar Range should be in order. Ladakh also offers marvellous shopping opportunities for Tibetan handicrafts, available in its vibrant markets. Make the most of your family tours in Ladakh by visiting Hemis National Park, home to a number of endangered species of animals. Snow leopards, Tibetan hares and yak are some of the animals that can be spotted here. The snow-capped mountains and welcoming seclusion of this enchanting region render it an ideal honeymoon destination. Ladakh honeymoon packages provide newlyweds a perfect milieu for spending days, full of love and adoration

5 Nights 6 Days Available on request Leh
Inclusions/Exclusions
What we'll give. What we won't

Day 1 - Arrival at Leh: Arrive Kushok Bakula airport Leh - 3500m above sea level. Get aboard the waiting vehicle and transfer to hotel. Check-in at the hotel. Today the full day is for rest and leisure to acclimatize to the higher altitude. In the evening visit Leh Market & Shanti Stupa. Dinner and stay overnight at the Hotel.

Day 2 - Leh (Full Day Excursion): Post breakfast we drive towards Kargil road and start our sightseeing with the Hall of Fame near Leh, which is worth a visit for every citizen. It is a museum constructed by Indian army. Next visit Kali Mata Temple and Spituk Gompa of Ladakh which dates back to the 11th century. A three-chapel monastery, Spituk is located at a distance of approximately 8 km from the town of Leh. Gurudwara Patthar Sahib is nestled deep in the Himalayas, which was built by the Lamas of Leh in 1517 to commemorate the visit of Guru Nanak Dev.

A drive of another 4 km takes us to Magnetic Hill which defies the law of gravity. It has been noticed that when a vehicle is parked on neutral gear on this metallic road the vehicle slides up! Driving through a picturesque landscape we reach the confluence of the Indus and Zanskar river 4 km before Nimmu village.

Day 3 - Leh to Nubra Valley: After an early breakfast we drive to NUBRA VALLEY through KHARDUNG-LA the highest motorable road in the world at 18,390 ft. It is around 39kms from Leh. Nubra Valley is popularly known as Ldorma or the valley of flowers. It is situated to the North of Ladakh between the Karakoram and Ladakh ranges of the Himalayas.

In the afternoon visit Hunder Monastery. Hunder is one of the remote villages in the Ladakh district of India's northernmost State of Jammu and Kashmir. Lying close to the border between India and Pakistan in the north-western part of Ladakh, the village of Hunder comprises settlers that include Ladakhis and Tibetans. You can visit the SAND DUNES here to enjoy a camel safari (Optional on direct payment basis). Overnight stay at Nubra camp.

Day 4 - Nubra Valley to Leh: After your breakfast at the camp, visit Diskit Monastery en route to Leh. The Diskit Gompa of Leh Ladakh dates back to the 14th century and owes its inception to Changzem Tserab Zangpo, a disciple of Tsong-kha-pa. At the heart of Diskit Monastery is an elevated cupola, which stands adorned with a beautiful fresco that illustrates the Tashilhunpo Gompa of Tibet. There are a number of shrines inside the monastery's complex, like Kangyu-lang, Tsangyu-lang, etc. Also, hundreds of Mongolian and Tibetan texts have found their storehouse inside these temples. Diskit Gompa has quite an interesting legend attached to it. It is believed that a Mongol demon once lived here and was considered to be a sworn enemy of Buddhism. Afternoon rest and relax or take a walk to the local market. Overnight at hotel.

Day 5 - Leh (Excursion to Pangong Lake – 14,000 Ft.): After an early breakfast leave for Pangong Lake through Changla pass 5380 mtrs. Pangong Lake, situated at 14,000 feet (4,267 m), is a long narrow basin of inland drainage, hardly six to seven kilometer at its widest point and over 130km long, it is bisected by the international border between India and China. A few years back the government decided to open it to tourists, though the lake and its surrounding area is under army surveillance. Hot lunch will be served at Pangong. After spending some time at Pangong drive back to LEH hotel for the overnight stay.